Aikido of South Florida was founded by Stephanie Yap Sensei who has earned a 7th degree black belt and the Menkyo Kaiden in Aiki-Ken and Aiki-Jo, awarded to her by the late Morihiro Saito Sensei, 9th dan. After graduating from the School of Engineering and Design in Miami, FL, Sensei Yap engaged in becoming a long term uchideshi (live in apprentice) to Morihiro Saito Sensei, one of the highest ranking and most prestigious aikidoists in the world. This initial training as uchideshi under Morihiro Saito Sensei has subsequently been enhanced by annual training sessions, accumulating numerous years spent living and training in Iwama, Japan. Throughout her many years of dedication and diligence to the Saito Family, Sensei Yap, a member of Iwama Shin Shin Aiki Shurenkai, has achieved the honor of being the highest ranking female in the organization.

A dedicated tutor, Stephanie Yap Sensei remains under the auspices of Hitohiro Saito Sensei since the passing of Morihiro Saito Sensei in 2002. She has traveled extensively throughout the world providing seminars in Korea, Mongolia, France, Scotland, Germany and South America, to name a few. Sensei Yap has also the privilege of being involved with AHAN, a non-profit organization which is a humanitarian organization serving the underprivileged and charities worldwide.

For several years, Sensei Yap, with the direction, organization and guidance from Gakku Homa Sensei (Founder of AHAN), has been involved in the raising of food, financial aid, medical supplies and other provisions to charities around the world. These establishments include Children with Cancer, Children's Burn Center, Children's Orphanages and homeless shelters. All the proceeds raised from Sensei Yap's seminars in affiliation with AHAN are directly provided to the organization delegated. Through these humanitarian efforts and she has realized ,first hand, the power of using aikido as a tool to truly reconcile the world, one step at a time.

In addition to her credentials, Sensei Yap has the experience of not only training annually at the Iwama Dojo, accumulating numerous years as uchideshi, but she also instructed the Hollywood, Ft Lauderdale Police Department, and the Fort Lauderdale S.W.A.T team in a series of seminars formatted towards their specific needs.

Senpai Alex began his aikido training under the tutelage of Stephanie Yap Sensei and has been diligently committed to his personal growth in Aikido as well as the growth of Aikido of South Florida over 25 years. As a veteran graphic designer with over 30 years experience, Alex has a natural eye for great detail and is effortlessly able to execute and relay the essence of aikido to students of all levels. As a primary instructor of the dojo, Alex ‘s passion for aikido permeates in his teachings. He demonstrates and validates the pragmatic, strategic and logical efficiency of aikido.

Throughout his years in aikido, Alex has had the honor of travelling to Japan numerous times to serve as uchideshi under the Great Morihiro Saito Sensei, 9th dan, one of the world’s highest ranking student of O’Sensei who was the longest uchideshi himself for 24 years under continuous exposure to the Founder, O’Sensei. During this time, Alex has also had the honor of receiving his ranks directly from Morihiro Saito Sensei during his tenure as uchideshi in Japan, and holds these experiences as uchideshi in constant interaction with Saito Sensei as some of the most memorable to date.

Since the passing of Morihiro Saito in 2002, Alex, more committed than many practitioners, now continuous to serve as uchideshi under the tutelage of Hitohira Saito Sensei, the heir apparent. He has traveled throughout the United Sates, Germany, Denmark, Japan, South America and Russia, to name a few, participating in seminars in order to develop his personal growth in aikido.

Alex has a ceaseless curiously to understand and discover the principles of aikido in depth, it’s core, it’s development, which makes him such an exceptional instructor and student. We are very fortunate to have him in our Aikido family, as you will experience. He is devoted to the art, the school, to the students, and is an essential part of our school.

Senpai Jose began his path of Aikido at Aikido of South Florida under the tutelage of Sensei Stephanie Yap over 20 years ago and has become an integral part of the dojo ever since. He is committed to art with full sincerely and belief in it’s principles. For decades Jose was dedicated to his lucrative refining company National Metals. Wanting to simplify his chaotic lifestyle of running a national corporation, he dismantled his company to focus on more important things in life. Since then, he founded and manages Navy Sealz, Inc but is now mostly committed to the development of Aikido of South Florida as a primary instructor of the dojo. 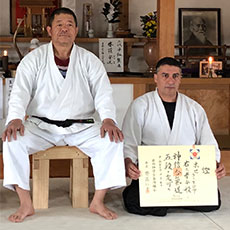 During his years at Aikido of South Florida, Jose has had the honor of travelling annually to Japan to serve as uchideshi under the tutelage of Saito sensei. He has also traveled throughout the United Sates, Germany, Russia, South America, Japan and Mexico, to name a few in order to further develop his aikido and build bridges across the globe.

Senpai Jose is an exceptional student and an exceptional instructor. He is one that sincerely cares for everyone’s well being mentally and physical and shares his candid, practical and sometimes comical style of teaching with a heavy hand when needed.

He is devoted to the art, to the school and to the students who share the same passion as he his passionate in every endeavor he chooses. We all are so grateful to have Jose in our aikido family.