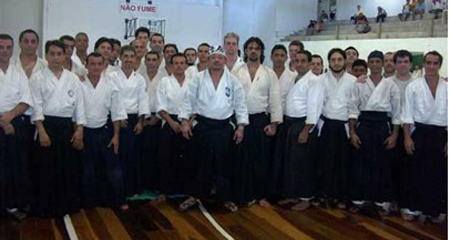 The seminar was held at the Fort do Leme Brazilian Military base facility located near the world famous resort of Copa Cabana Beach in Rio de Janeiro. 150 Aikidoka from nine countries and thirty-three dojos of different styles and affiliations came to attend this landmark event.

During opening ceremonies, Hitohiro Jukucho called for a moment of silence to honor the passing of Pope John Paul II, a leader to the people of this country of Brazil. Also present for the opening ceremonies was Kazutami Shikanai Shihan who traveled five hours by bus to attend these ceremonies. Shikanai Shihan is a direct student of Yasuo Kobayashi Shihan (Aikido Kobayashi Dojo, Japan), and has been in Brazil for many years as one of the original Aikido pioneer instructors. As an honored and respected instructor in Brazil, Shikanai Shihan’s decades of effort and accomplishments were acknowledged to all seminar participants.

For the second consecutive seminar, the Consul-General of Japan to Rio de Janeiro, Mr. Toshio Ikeda took time out of his busy schedule to give a welcome speech at the Rio de Janeiro seminar opening ceremonies. During his years as a University student in Japan, Consul-General Ikeda practiced Aikido, and seminar attendants were surprised to see him practicing on the mat in the practice that followed the ceremonies. Everyone was respectful of a man of his position’s willingness to practice Aikido with attending students. We sincerely appreciate Consul-General Ikeda’s time, and thank him for his participation in the event. I feel it is important to reiterate that the purpose of Nippon Kan’s International Instructor Series 2005 is to invite world class instructors of many different styles or affiliations to come together with Aikidoka all of the world in a spirit of friendship, communication and to serve our communities. A goal of Nippon Kan series organizers is to scout out and promote quality instructors and allow them the chance to share their understanding with others. The purpose of this series is not to promote one particular type or style of Aikido. The purpose is not to promote any one organization or to gain profit from the event. As always, seminar proceeds from this event were donated to a local humanitarian organization of the choosing of the host dojo. In this way, the reputation of our Aikido community as a whole can be raised, as well as it being a wonderful opportunity to communicate across borders and barriers. These and only these are the main ideals and principals behind this International Instructors Series 2005.

This seminar was hosted and organized by Brazil Nippon Kan which is a collective of small dojo groups instructed by Luc Leoni Sensei. Luc Leoni Sensei is also the Founder of AHAN Rio de Janeiro, which has gained status and notoriety for its involvement in many humanitarian, educational, and environment projects in the Rio de Janeiro area. Because of AHAN Rio de Janeiro’s involvement in the community, there was a strong media presence at this fundraising seminar event. The largest Brazilian TV station; The Global Channel, and other educational channels including TV-E were present at the seminar along with a number of magazine and newspaper reporters.

At the closing ceremonies, seminar proceeds were given personally by Hitohiro Jukucho to representatives of the Obra do Berco and LAR Beneficente AMAR orphanages. The proceeds were donated in the form of promissory receipts that will be exchanged over the next year for monthly supplies of formula, diapers, paper products, laundry soaps and other needed items by AHAN Rio de Janeiro staff members. In this way, badly needed items will go directly to the children on a monthly basis.

With the two week Mexico-Brazil schedule drawing to a successful close, Dento Iwama Ryu Shin Shin Aiki Shurin Kai Tanren Juku Hitohiro Saito Jukucho did not seem tired as he hopped cheerfully back on the plane heading home to Japan.