I would like to take this opportunity to thank all the members of Aikido of South Florida, our most generous sponsors and those who participated and contributed to the great success of the March 12-13, 2011 Kai-Cho Hitohiro Saito seminar. We were so fortunate to have attendees from 6 different countries, 16 different states and 34 different dojos to share a weekend of incredible instruction, good food and lots of laughter.

Saturday morning proved to be truly exciting as we entered into the first class as Sensei bowed in front of the impressive 10 foot torii that was built for the seminar. I myself thought the seminar coasted well beyond my own expectations as he was in rare form. At the end of the day's training we managed to take photos of all the participants in a record 25 minutes which allowed enough time for all to get ready for the evening party, and what a party it was. 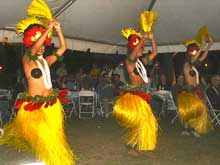 The party started at 7:30pm where we had an attendance of approximately 150 guests under expansive white tents canopied by a star filled sky. It was certainly a celebration of dancing until 1 am+ and feasting on the succulent ribye steaks, not to mention the added entertainment of the talented Polynesian dancers. It was incredible to see the focus level of everyone watching the mechanics of the dancers' hip movements verses that of Sensei's during the seminar. The traditional fire dance was also a treat that, to be considerate of all the guests, provided and little eye candy for the women as well! Also, those who know Sensei know you can't go wrong with fire!

Sunday's energy was no less than fantastic due to the bonding techniques that have been exercised since the beginning of time, good food, old and new friends, music and laughter. The atmosphere seemed much lighter as we all seemed to have known each other much longer than the weekend passing so quickly.

It has been only a short time since the ending of the seminar and I have already received so many emails expressing how much this weekend event was enjoyed, how much they appreciated Sensei's sincere devotion to the art, the time he took to explain techniques and how much they look forward to his return. I appreciate all the participants again for opening their hearts to Hitohiro Saito and taking the time and commitment to make this journey.

In speaking with Sensei at the night's end he was so happy to be received so well by so many people from so different walks of life and looks forward to returning to Florida again in March 2013. He had requested an encore performance from the Polynesian dancers the following night, but I had to unfortunately tell him that it was not in the budget.

For those anticipating the pictures from the seminar to be posted, we will try to get them uploaded as soon as possible for you to download. If by chance anyone has any pictures that they would like to submit from the party or the seminar please feel free to do so and we will review them before posting.